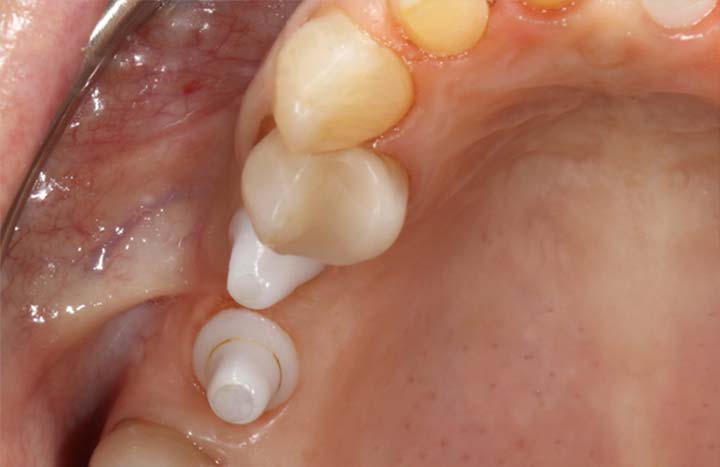 Ceramic implants consist of high-performance ce­ramic zirconium dioxide. As the material is present in its oxide state, it no longer reacts chemically,1 does not ex­hibit free-binding electrons and is inert.2 Temperatures above 2,600 °C or the application of hydrofluoric acid are necessary to change the material. The low affinity with plaque, the lack of thermal and electrical conductivity, and the resistance to corrosion are great benefits of zir­conium dioxide over titanium.1–8 While titanium stimulates the release of TNF-α and interleukin-1β and apparently osseointegrates the implant towards chronic inflamma­tion with a type of encapsulation, these messenger sub­stances are not activated during the healing process of zirconium dioxide. Brånemark assumed that titanium implants achieve true non-reactive osseointegration. Today, we know that this is not the case.1, 9–12 Zirconium dioxide heals absolutely inert, shows as high a bone-to-implant contact as titanium does and achieves genuine osseointegration.13–19

In the case of titanium, abrasion occurs with high fric­tion when the implants are inserted, and as a result of the process of (bio)corrosion, titanium dioxide particles are released into the surrounding hard and soft tissue, activating macrophages.20–28 This activation leads to the aforementioned release of TNF-α and interleukin-1β, which results in local reactions and chronic systemic in­flammation (silent inflammation). The activation of os­teoclasts triggers bone resorption in the sense of peri-implantitis.29 Since zirconium dioxide does not corrode, macrophage activation with this material is probably not expected. Bone resorption around ceramic implants oc­curs rarely, but is mainly caused by very high insertion torques. This has a particularly fatal effect with ceramic implants, as they are poor thermal conductors. The fric­tional heat generated on the implant’s surface during in­sertion is not conducted to its core. Therefore, the ce­ramic implant from Swiss Dental Solutions, developed by Dr Karl Ulrich Volz, is designed in such a way that all friction and stability are obtained from the apical part, and its deep and aggressive thread makes it impossi­ble to overheat the cortical bone if the drilling protocol is applied correctly.

In the crestal part of the bone, the last drill, the counter­sink, is used for overextended preparation, thus avoid­ing any pressure of insertion in this sensitive and less vascularised area.30 The aggressive apical thread allows the implant to be re-torqued to > 35 Ncm in more than 80 % of cases in the case of connective tissue healing. In such cases, the implant will osseointegrate with more than 95 % certainty, since the very thin layer of connec­tive tissue between the implant and the bone will differ­entiate back to bone owing to the inertia of the material. This understanding of the physical, biological and immu­nological properties of zirconium dioxide is very import­ant when one considers bone reconstruction measures. In general, the need for such measures has significantly decreased in the clinics of the authors, since immedi­ate implants can be placed in almost all cases owing to the properties of zirconium dioxide. Even in previously highly inflamed areas, zirconium dioxide does not tend to cause further inflammation if a conscious monitoring pro­tocol (SWISS BIOHEALTH CONCEPT) is followed. How­ever, there are still many patients who have lost significant bone volume as a result of tooth extractions in the past and therefore require bone reconstruction. In the follow­ing, we will present the corresponding measures applied in the Swiss Biohealth Clinic with an emphasis on the use of autologous materials.

Patients who request ceramic implants usually do not accept synthetic or secondary materials of animal origin, but would like to be treated completely with autologous materials. In our concept, the only exception is the use of live donor bone, since it is completely resorbed within a few weeks and replaced by well-vascularised localised bone. Basically, all augmentation techniques date back to the tentpole and umbrella principle described in 1998 in a case report by Hämmerle and Karring.31 In this report, bone regeneration did not work because of the material used but despite it, because the periosteum has an osteoinductive potential that should remain unharmed.32 For this reason, relieving incisions and periosteal slits should be avoided. Rather an incision in the gingival margin should be made and the brushing technique according to Dr Alain Simonpieri should be employed.

The newly built bone described in the case report by Hämmerle and Karring biologically beats every bone block or secondary augmentation material, since it is de novo bone, healthy and well-vascularised lamellar bone. Any filling material in the cavity created in the form of a bone block or granules, of animal or synthetic origin, is an obstacle to angiogenesis, which in turn is a prerequi­site for the formation of bone callus. The same laws ap­ply to the sinus cavity, since the Schneiderian membrane also has an osteoinductive function.33–35 All materials we have placed there over the last 30 years have been used exclusively to keep the Schneiderian membrane at a distance and thus create a mechanically stable cavity. According to the biological laws, this cavity will eventu­ally fill with new bone.36 However, a paradox must also be considered here: the more densely a filler is pack­aged into the raised cavity, the less space there is for angiogenesis. Thus, the goal of any biologically finalised guided bone regeneration (GBR) is to create a mechan­ically stable cavity that should be filled with platelet-rich fibrin (PRF) membranes and blood as carriers of infor­mation, and possibly with autologous bone chips. This is also the basis of the Khoury technique,37 in which the space for the newly formed bone is limited by cortical bone plates and a rapidly resorbable bone substitute material is introduced into the cavity, or dispensing bone substitute material, only a blood clot or PRF membranes fill the cavity.

In recent years, it has been shown that, especially in the posterior jaw, augmented bone blocks are completely resorbed or partially resorbed up to 2–28 %, which is related to the fact that the bone block itself causally prevents angiogenesis in the cavity it occupies. In the posterior mandible, this problem is particularly evident, since posteriorly from the mental foramen, the blood circulation comes almost exclusively from the central and not from the peripheral. From its central origin, it is almost impossible for the inferior artery to grow thorough the coronal compacta into the bone block.38–45 The con­cept of biological GBR is to create a large hollow space, which should be kept mechanically stable for at least four weeks and should not collapse under the periosteum or the Schneiderian membrane. We have this situation with each immediate implant placement, especially when an aggressive apical thread anchors the implant to the bot­tom and therefore primary stability is achieved over not only the width but also the length. Ideally, the implant should have a wide tulip, which achieves the largest pos­sible shadow effect and therefore an umbrella effect. Figure 1 explains the mechanisms that take effect in the immediate placement of an implant with simultaneous application of the principle of the healing chamber.46, 47

The already described technique in which the implant resembles a tentpole is enhanced by the use of a disc abutment, increasing the shadow effect of the implant tulip by screwing on a wide ceramic disc of zirconium dioxide to cover the alveolus. The implant itself is stabi­lised only by an internal elevation of the sinus floor and is anchored by the apical part of approximately 2 mm and by the aggressive thread (Figs. 2a–d). The postopera­tive radiograph shows complete bony filling with de novo bone over the complete 14 mm length of the implant (Fig. 2e).

Balcony implants are mostly used as immediate implants and increase the shadow either to one side (in case of an asymmetric insertion) or both sides (when placed sym­metrically as a double balcony; Figs. 3a–d).

Dr Karl Ulrich Volz introduced a new type of implant in 2017 with the intention of applying the tentpole and um­brella principle in the sinus cavity and dispensing with secondary materials (Figs. 4a–f). The umbrella effect of the disc at the apical end of the implant is enlarged by the authors by placing the lateral bone cover over it. This is enclosed in two PRF mem­branes and inserted between the Schneiderian mem­brane and the apical part of the implant. Thus, the for­mation of vital and perfectly vascularised lamellar bone can be facilitated without the use of secondary materials. This technique also reduces costs, considerably, as no additional positions are required for secondary materials, membranes or screws. This technique should be used with a residual bone height of 3–5 mm, depending on the width of the alveolar crest and density of the existing bone. Stable fixation of the sinus implant is an absolute requirement here.

A possible site for harvesting autologous bone is the healthy cortical part of the tubercle region. In addition, using the Safescraper, it is possible to easily obtain 2 cm3 of cortical bone chips in the lateral maxillary sinus. This allows perforations to be closed vestibularly, as well as in the maxillary sinus. The maxillary sinus can be filled with these chips in addition to the insertion of PRF mem­branes. At the same time, the alveolar crest can be raised vertically and widened laterally (region #16; Figs. 5a–e). Figures 6a & b show in an impressive way the possible gain in bone volume when applying this technique.

A list of references can be accessed at https://qr.oemus.com/8039