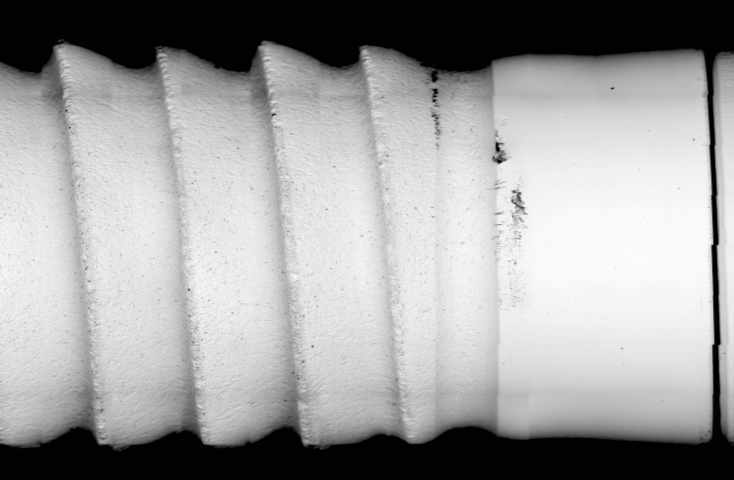 This article summarises a recent peer-reviewed study that is a follow-up to a pilot study conducted in 2019 that focused on titanium-made implants and scientifically validated the implant quality assessment process utilised by the non-profit organisation CleanImplant Foundation. The new study examines five ceramic implant systems, which were purchased anonymously (blind shopping): implants from two Swiss manufacturers, as well as implants from a Taiwanese, a German, and an Israeli company. The results will be published in the International Journal of Oral & Maxillofacial Implants.

Three sterile-packed samples of each implant system were examined using scanning electron microscopy and a complex image-mapping technique, resulting in a large high-resolution image that covered the entire sample from the implant shoulder to the apex in material contrast. Contaminants were analysed by elemental analysis. Conspicuous impurities were then chemically identified using time-of-flight secondary ion mass spectrometry. In addition, the surface topography of all systems was evaluated, and different roughness values were compared. Finally, a search for clinical studies was conducted of the PubMed database, of the suppliers’ websites and by written request to the individual implant manufacturers.

The Swedish-German research team from Charité Universitätsmedizin Berlin (Duddeck and Florian Beuer), Sahlgrenska Academy at the University of Gothenburg (Tomas Albrektsson and Ann Wennerberg) and Malmö University (Christel Larsson), supported by the International University of Agadir (Jaafar Mouhyi), revealed some unexpected results. While the surfaces of two of the investigated implant systems were found to be largely free of particles, the other systems examined revealed significant carbon-containing organic impurities on their surfaces. Subsequent time-of-flight secondary ion mass spectrometry analysis identified these contaminants as polysiloxanes, erucamide, aliphatic hydrocarbon compounds, fatty acid esters, talc and even polyacetal (polyoxymethylene).

Remarkably, the study showed that in one system the sterile packaging itself was the cause of substantial plastic contamination on the sterile implant’s surface — some of the contaminants were millimetres in size. Dodecylbenzenesulphonic acid (DBSA) was also detected on samples of two implant systems, which suggests that the manufacturers’ cleaning process of the ceramic implants examined was insufficient. DBSA is an aggressive surface-active cleaning agent classified as hazardous by the U.S. Environmental Protection Agency.

The results of this study demonstrate that it is technically possible to fabricate largely residue-free zirconia implants. However, the large number of significant contaminants found in this analysis is a cause for concern, as every factory-related contamination may provoke unwanted adverse biological effects. It is worth noting that all systems evaluated in this study had CE markings or had received U.S. Food and Drug Administration marketing clearance. According to the authors, practitioners should always assume that foreign substances and contaminants can lead to undesirable biological effects—unless they have been proved harmless and not an impediment to the process of osseointegration. This precautionary principle should always be the guiding principle for any medical treatment, the authors concluded.

Editorial note: The article, “Quality assessment of five randomly chosen ceramic oral implant systems: Cleanliness, surface topography, and clinical documentation”, referred to in the text is in press. Printed versions of the publication can be requested at publication@cleanimplant.org.

More information can be found at: https://www.cleanimplant.com/