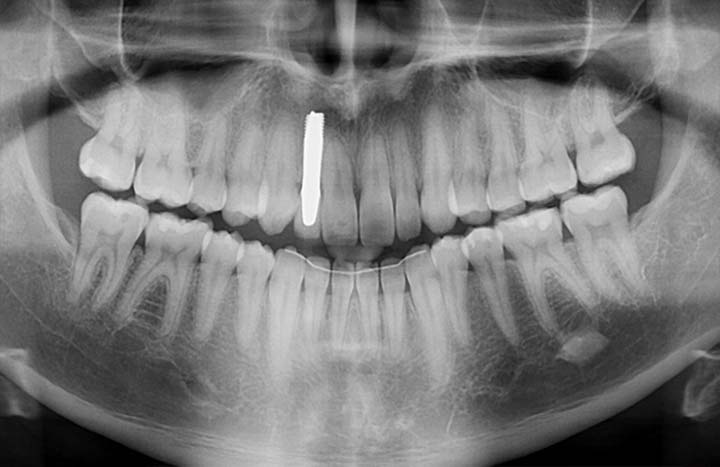 Titanium (Ti) implants are generally used to restore function and aesthetics following tooth loss.1 Numerous studies have demonstrated their excellent biocompatibility and high success rates.2, 3 However, the prevalence of peri-implantitis (PI) around Ti implants, should be a daily clinical concern due to their high incidence (Figs. 1a–c; resolution of the case shown in Figs. 8a & b).4 Recent studies have reported the presence of Ti particles around implants with PI compared to a healthy peri-implant environment.5, 6 Galvanic corrosion phenomena in the oral cavity could be related to the physiopathogenesis of PI.7 This issue takes up a large part in most of our conferences, and questions the reliability of our long-term implant treatments.8 The qualities of zirconia (ZrO2) ceramics as a prosthetic restorative material show us in daily use an extremely low bacterial colonisation, and allow soft tissues to act as a barrier to the underlying infection.9 This material is not a thermal nor an electric conductor, and, thanks to its high inertia, it has excellent chemical stability with almost no ionic release:10 this greatly contributes to its biocompatibility observed with periodontal cells, and could explain the absence of allergy or hypersensitivity to ceramics.11 ZrO2 implants may be considered as a real alternative to Ti for our patients, especially those with allergies, autoimmune diseases, periodontal risk factors and metal intolerances.12, 13 We must also consider the current trend in dentistry towards metal-free restorations, and the long-term aesthetic outcome of our restorations.

Osseointegration of zirconia compared to titanium

Successful integration of implants is based on osseointegration (in the hard tissue), and the formation of a peri-implant mucosal seal (in the soft tissues).14 As for the hard-tissue level, the key parameters to evaluate osseointegration include the measurements of the bone-to-implant contact (BIC) and the implant removal torque values (Fig. 2).15

Most of the studies show no significant differences between Ti and ZrO2 implants.16, 17 Several reviews of the literature mention the osseointegration capacity of ZrO2,18 including a 2016 review, which selected 14 articles out of 1,519 publications, with a cumulative success rate at one year representing 92%. In all these reviews, the authors concluded that ZrO2 implants do represent an alternative to Ti, but that further long-term studies are needed to confirm this.19 Different surface treatments have been proposed. For example, a laser-machined surface allows to achieve an increase of the BIC surface due to an increased micro- and macro- roughness. This technique considerably reduces the time for osseointegration. The survival rate currently exceeds 98%, and is comparable to that of new generation Ti implants. In regard to the soft-tissue level, the qualitative and quantitative dimensions of the peri-implant mucosa around ZrO2 implants are similar to those of Ti implants (Fig. 3).20, 21 Under these conditions, immediate implantation protocols can also be implemented as for Ti implantology (Figs. 4a–h).

Our implant restorations are inserted on the long-term, in a very septic and aggressive environment. The interface between this environment and the underlying structures (bone, vascular network) is provided by the peri-implant soft tissues. There is a real difference in terms of quality of this interface between a tooth and an implant. In 1991 and 1994, researchers described a fibre-free epithelial junction attachment around transmucosal Ti compared to the Sharpey’s fibres present around teeth, and concluded that the peri-implant soft tissues are more fragile.22, 23 They offer less mechanical strength, but are also less vascularised and more immune-sensitive.24–26 The long-term stability of peri-implant soft tissues is a key issue both in the fight against PI, and in the aesthetic and functional outcome of implant-supported prosthetic restorations. The quality of the mucosal seal around the transmucosal part of the implant restoration is crucial. In 2006, a list of the important and influential soft tissue factors for implant integration was published.27 This study revealed, among other things, that tissue-level implants behave better than bone-level implants; Ti and ZrO2 are preferable to gold or feldspathic ceramics for the transmucosal components; smooth surfaces are preferable to rough surfaces; in the case of bone-level implants, disconnection and reconnection of the prosthetic abutments should be avoided. It therefore appears logically that tissue-level implantology is better with respect to soft-tissue integration of implants (Fig. 5) in that issues such as gap problems, hermeticity of the subgingival prosthetic parts, the platform switching concept to reinforce the soft tissue seal no longer exist. Ti and ZrO2 seem to be the best materials for the transmucosal integration of our restorations. Integrating biological and aesthetic parameters, what is the best material to choose between ZrO2 and Ti at the soft-tissue level? This is a legitimate issue to question. The peri-implant mucosal seal acts as a protective barrier towards the underlying structures. There are three fundamental aspects to be considered: the microbiological aspect, the biomechanical aspect related to cell adhesion and proliferation around transmucosal implant structures, as well as the potential release of metal ions that disrupt local immunity.28

In a 2002 in vitro and in vivo comparative study on Ti, researchers described the transmucosal ZrO2 interface as an antimicrobial shield.29 This observation was confirmed by further studies. In 2014, researchers conducted an in vivo study based on the use of split casts worn for 24 hours, comparing ZrO2, smooth Ti and rough Ti.30 Analyses of the pathogenic and non-pathogenic flora revealed less microbial adhesion on ZrO2 than on the other two Ti surfaces. Consequently, bacterial colonisation is lower on ZrO2 than on Ti. This was confirmed again in 2016 by the same author, and later on by another researcher in 2018 in a 6-month follow-up study comparing transmucosal ZrO2 and Ti abutments they observed more pathogenic bacteria on Ti.31, 32 This difference in microbial behaviour towards Ti compared to ZrO2 exposes Ti to an increased risk of PI, as was pointed out in a review article in 2014.33 Microbial colonisation causes an inflammatory infiltrate within the tissues in response to this microbial presence. The tissue defence barriers are weakened and more permeable to biofilms. A chronic inflammatory wound then develops within the peri-implant soft tissues which disturbs bone metabolism, thus constituting a risk factor for PI: a phenomenon very similar to periodontitis. Around transmucosal ZrO2, researchers showed in 2015 that inflammation level decreased compared to Ti.34 The risk of alteration of the soft tissue barrier effect therefore lower with ZrO2 than with Ti. A recent study from 2017 confirms the positive influence of transmucosal ZrO2 on the level of pro-inflammatory cytokines present in the peri-implant sulcus.35 In this publication, the authors compared the behaviour of the transmucosal ZrO2 and Ti abutments using split-mouth in vivo study. They showed that the pro-inflammatory cytokine levels were significantly higher around Ti compared to ZrO2. As often reported in the medical literature, some controversies exist. In 2015 researchers published, in the very serious Journal of Clinical Oral Implant Research, a meta-analysis comparing the effect of Ti and ZrO2 on the soft tissues.36 The inclusion criteria were strict: 11 studies were selected including only prospective randomised controlled studies on the same patient. They concluded that Ti and ZrO2 behaved similarly. The only difference in favour of ZrO2 was aesthetics. However, very recently in 2018, in the same Journal a review article and meta-analysis on the effect of transmucosal abutment characteristics on peri-implant soft tissue health was published: the authors concluded that the risk of PI is increased with Ti compared to ZrO2.37

Tissue and cell behaviour towards zirconia

In addition to the “antimicrobial” effect of ZrO2 mentioned earlier, the literature describes a favourable behaviour of ZrO2 on the peri-implant soft tissues. The interaction with soft tissues and transgingival ZrO2 generates a mechanical antimicrobial barrier effect that protects the underlying structures (Fig. 6). In a 2004 study on the cell behaviour around transmucosal ZrO2 implant necks compared to Ti, the authors observed better fibroblast adhesion and cell proliferation around ZrO2.38 In another study from 2009 on animal histological sections, the authors showed collagen fibres orientated perpendicular to the ZrO2 surface as opposed to Ti where they were parallel.20 This fibre orientation reinforces the peri-implant mucosal joint and may partly explain the “creeping attachment” phenomenon which is clinically observed around ZrO2 necks. In 2019, a Korean team carried out a comparative in vivo and in vitro animal study on the behaviour of peri-implant tissues with respect to ZrO2, Ti and hydroxyapatite.39 In particular, they evaluated the quality of the mucosal joints around these three implant surfaces. ZrO2 obtains the best results on the histological sections and in vitro cell levels; ZrO2 also promotes better proliferation of human fibroblasts (HPLF and HGF) and extracellular matrix cells (IhCEM) compared to Ti and hydroxyapatite. Due to its properties, transmucosal ZrO2 appears to behave more like natural teeth with respect to soft tissues. This can be illustrated by a 2015 study which shows that blood flows around transmucosal ZrO2 abutments are similar to those around natural teeth (Fig. 7).40 ZrO2 appears to be a biomimetic material around which the quality of the peri-implant mucosal joint is better than around Ti. The reduction to biofilm proliferation and the quality of soft tissue integrity which have been demonstrated around ZrO2 provide a double protective barrier for the underlying tissues to chronic inflammatory infiltration and microbial invasion which is probably the main risk factor for PI. Thus, the use of the ZrO2 implant to establish a high quality peri-implant mucosal seal can be considered a preventive approach in the strategy to control PI.

ZrO2 implants have been around for 20 years, and if at first glance their interest may seem limited to pure aesthetics due to their colour. Today we realise that, thanks to their exceptional mechanical properties and optimal biocompatibility and immuno-compatibility, they certainly represent the future of implantology. Placing ZrO2 implants in our patients is part of a preventive approach to peri-implantitis, because the quality of the peri-implant tissues achieved around these implants is an antimicrobial barrier which protects the underlying structures. The absence of oxidation reactions around the ZrO2 implants and the reduction of bacterial plaque are real assets for their long-term stability in the particularly aggressive environment of the oral cavity. The latest currently available generations of ZrO2 implants offer mechanical, biological and aesthetic qualities close to those of natural teeth.

A list of references can be accessed at https://qr.oemus.com/9003